Dev Griffin has become the third celebrity to be eliminated from this year’s Strictly Come Dancing, following an unexpected dance-off against Viscountess Emma Weymouth.

The radio host, 34, performed a Cha Cha to Dancing With A Stranger by Sam Smith and Normani on Saturday’s instalment of the BBC show, and on Sunday night, after performing it once again, the judges voted unanimously to save chef Emma, leaving Dev’s dance partner Dianne Buswell, 30, in floods of tears.

On Saturday evening, fans of the show took to Twitter to claim that they ‘couldn’t vote’ for Dev and Dianne, because their designated ‘phone line wouldn’t accept calls,’ with others viewers furiously branding the show a ‘fix’ following Sunday’s results. 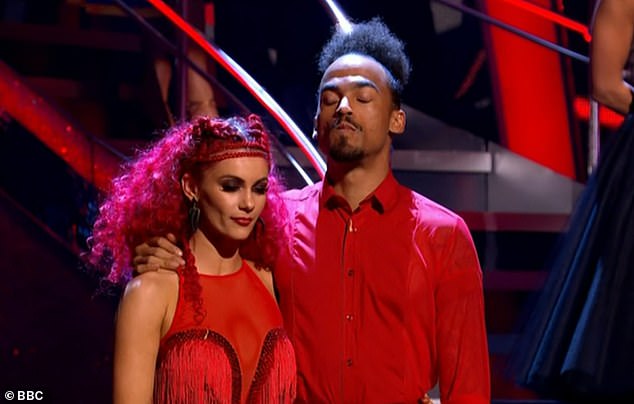 On Saturday evening, fan Kirsty Powers, from South Wales, tweeted: ‘The voting phone line ain’t working for Dev and Dianne!!!! Works for some and not for others!!! Strictly sort it out they we[re] under scored!’

‘I tried to vote for Dev and Dianne and it didn’t work for me either!’ responded another viewer.

One furious fan of the show wrote: #Strictly is a fix!!! Dev and DIANNES phone line wasn’t working last night. can’t believe after all these years this is what it comes down to?! What a joke @dbuzz6589 you’re amazing and we all love you so much.’

A spokesperson for Strictly Come Dancing told MailOnline: ‘The phone line blockages impacted all contestants equally — and that the likelihood of getting through was not dependent upon the celebrity fans wanted to vote for.’ 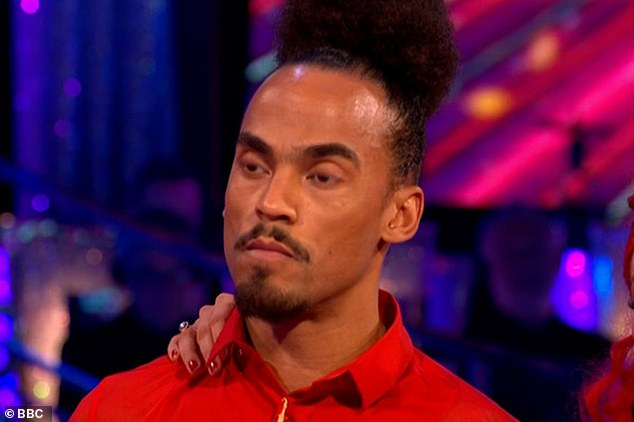 Gutted: As he learned of his fate, the presenter admitted his devastation, telling show host Tess Daly: ‘I’m not going to lie I am absolutely gutted’ 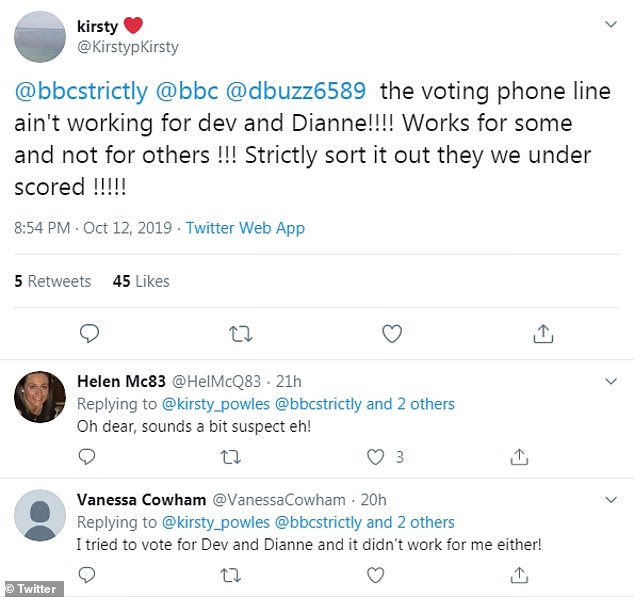 Oh dear! On Saturday evening, a fan of the show took to Twitter, claiming  they ‘couldn’t vote’ for Dev and his dance partner Dianne Buswell, because their ‘phone line wouldn’t accept calls’

Furious: Others Strictly viewers furiously branding the show a ‘fix’ 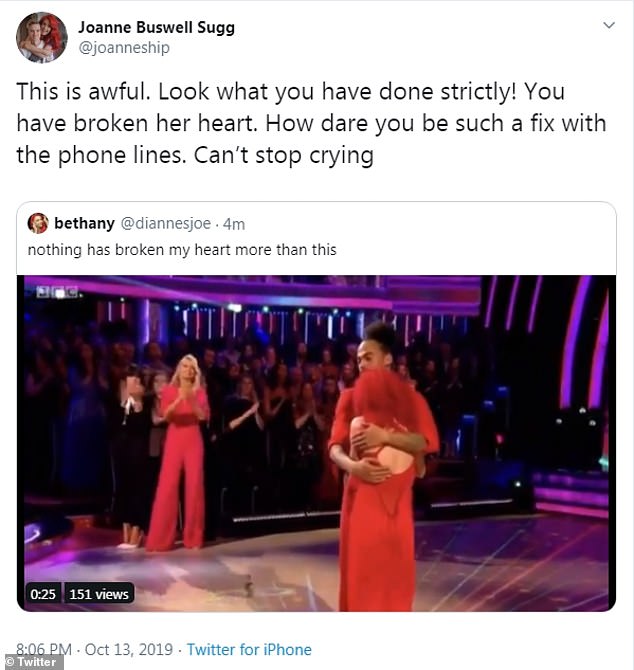 Viewers vowed to boycott Strictly as they were left seething over this weekend’s results, with one person tweeting: ‘Makes me not wanna watch anymore when bulls**t like this happens he was way better #Strictly.’

One fan sent a tweet to Dianne Buswell, which read: ‘I can’t believe you have left. You were amazing. My 12 year old daughter is refusing to watch anymore as she’s so upset.’

Another viewer tweeted: ‘not going to watch strictly this year after tonight. How was it fair that Dev went out if his phone line wasn’t working, and the fact that all the bad ones got overmarked. This is ridiculous!’

Boycott! Viewers took to social media, vowing to boycott Strictly as they were left seething over this weekend’s results

Someone else wrote: ‘I say we boycott strictly and just don’t watch it #strictlyresults,’ with another adding: ‘I’ll not watch Strictly ever again following this absolute outrage.’

One fan asked: ‘Why have you gone? its a fix this weekend has been a shame u hate you strictly as a dancer my self i feel its fixed disgusting programme will never watch again.’

‘I refuse to watch any more @bbcstrictly after this evening’s result, it’s just ridiculous!’ tweeted someone else, with another added: ‘I might just not watch strictly any more tbh.’

As he learned of his fate, radio presenter Dev admitted his devastation, telling show host Tess Daly: ‘I’m not going to lie I am absolutely gutted.’ 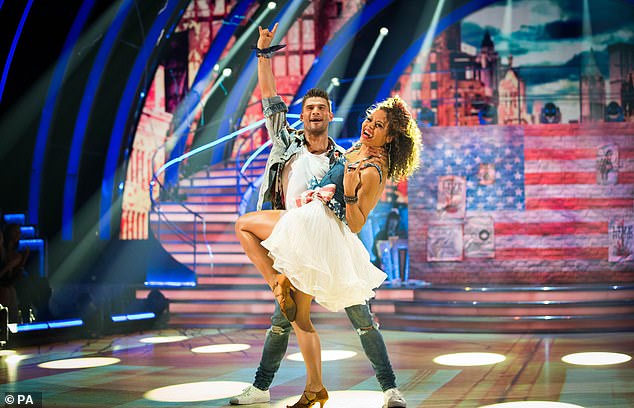 Saved: The judges voted unanimously to save chef Emma Weymouth after the dance-off 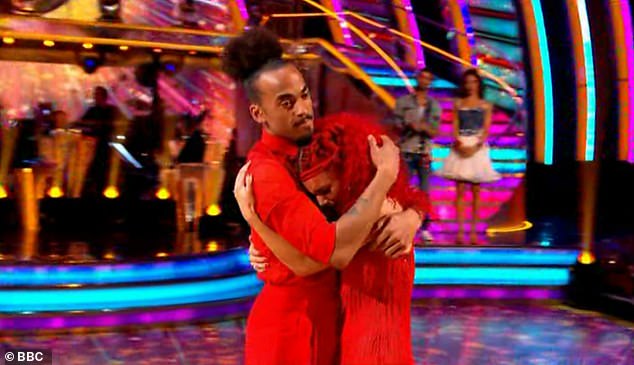 Heartbroken: Dev’s dance partner Dianne Buswell, 30, was left in floods of tears after being axed from the show

Dev continued: ‘But, learning how to dance, hanging out with Dianne and the other pros and celebs… I’ve absolutely loved it.’

Praising her celebrity dance partner, Dianne said: ‘Dev has been absolutely amazing. His work ethic is insane. I see him everywhere practising and I couldn’t have asked for a better partner.

‘Thank you so much for all your time and your effort. This boy has so much talent, I’m really sad he won’t be able to show you guys any more of it.’ 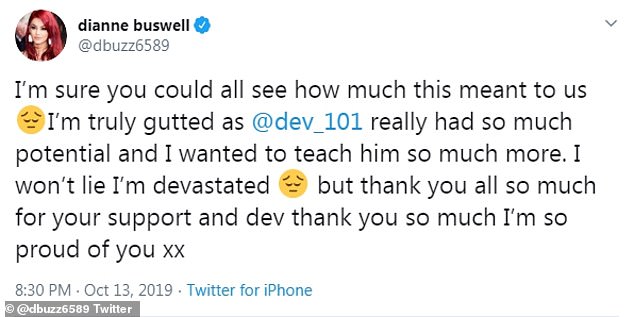 Devastated: Dianne took to Twitter after the result was announced to express her devastation

The pair’s early exit was particularly notable, as just last weekend, Dev and Dianne came second on the leaderboard thanks to an incredible performance to Friend Like Me from 2019’s Aladdin remake.

Dianne took to Twitter after the result was announced to express her devastation, writing: ‘I’m sure you could all see how much this meant to us I’m truly gutted as @dev_101 really had so much potential and I wanted to teach him so much more.

‘I won’t lie I’m devastated but thank you all so much for your support and dev thank you so much I’m so proud of you xx.’

This weekend, the stars competing on Strictly were tasked with giving their most impressive performances as they rook to the dancefloor to perform ballroom and Latin routines.

However, Dev and Dianne found themselves facing off on the dancefloor during Sunday’s episode, after failing to overly impress the judges and the viewers at home.

The judges’ scores were combined with the results of the viewers’ votes to decide the lowest scoring two couples facing the dance off.

This week that was Dev Griffin and his professional partner Dianne Buswell and Viscountess Emma Weymouth and partner Aljaž Škorjanec. 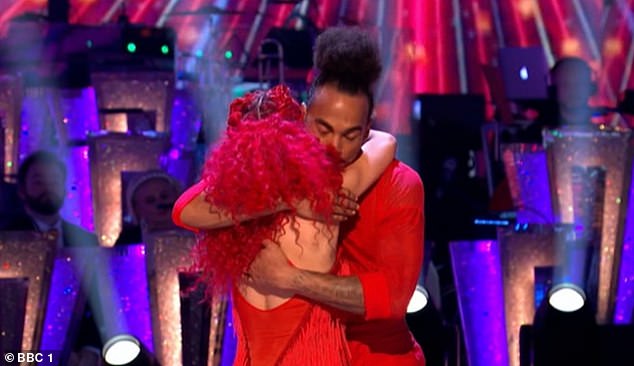 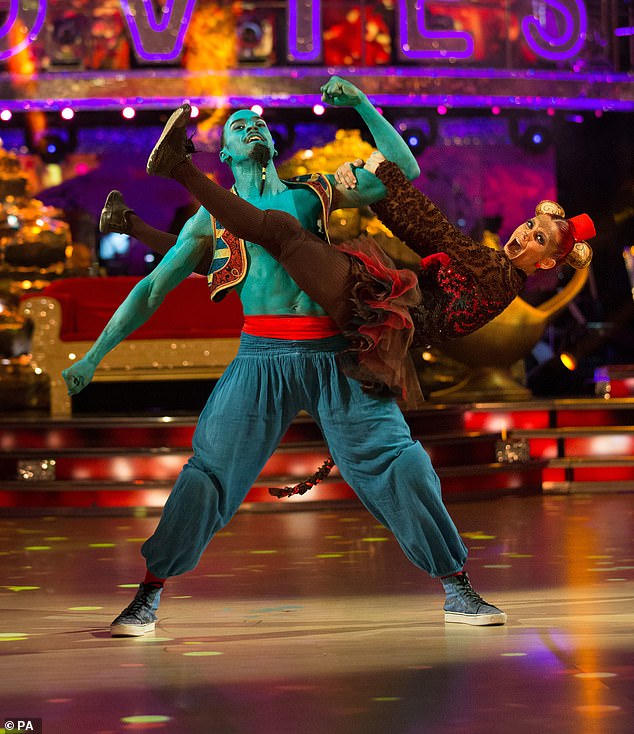 Awe-inspiring: The pair’s early exit was particularly notable, as just last weekend, they came second on the leaderboard with a performance to Friend Like Me from 2019’s Aladdin remake

Ahead of the dance-off, Craig Revel Horwood told Dev: ‘I am truly shocked. I did not expect to see you in this position. You’ve got the dancing down, you don’t need to worry about that,’ before encouraging him to give more in their performance.

Shirley Ballas added: ‘I’m surprised you’re in the bottom two,’ before giving Dev words of advice ahead of his dance-off.

Both couples performed their routines again, Emma and Aljaž performed their Jive to Kids in America by Kim Wilde and Dev and Dianne performed their Cha Cha to Dancing With A Stranger to Sam Smith and Normani in a bid to impress the judges and remain in the competition. 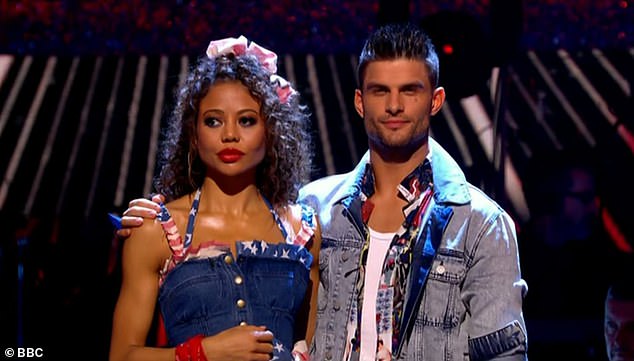 Dance-off: Both couples performed their routines again, with Emma and Aljaž performing their Jive to Kids in America by Kim Wilde

Craig chose to save Emma and Aljaž, adding: ‘They were the couple that really shone for me in this dance off. They came to life and went the extra mile.’

Motsi also chose to save Emma and Aljaž, explaining: ‘Particularly in the dance off, Emma and Aljaž were the couple that looked more rehearsed and on top of it.’

Following suit, and putting the final nail in the coffin for Dev, Bruno chose to save Emma and Aljaž, adding: ‘Emma and Aljaž were the couple that showed no mistakes. They were stronger, cleaner and focused.’

Head Judge Shirley Ballas admitted: ‘I agree, I would have saved Emma and Aljaž.’

The remaining twelve couples will take to the dancefloor next week when Strictly Come Dancing returns on Saturday 19th October at 6.40pm with the results show on Sunday 20th October at 7.15pm on BBC One and BBC iPlayer.

Karim Zeroual and Amy Dowden: Tango to ‘Paradise’ by George Ezra – 38 points out of 40

Kelvin Fletcher and Oti Mabuse: Rumba to ‘Ain’t No Sunshine’ by Bill Withers – 36 points out of 40

Emma Barton and Anton Du Beke: Viennese Waltz to ‘Send in the Clowns’ by Barbra Streisand – 35 points out of 40

Saffron Barker and AJ Pritchard: Couple’s Choice: Contemporary to ‘Because You Loved Me’ by Celine Dion – 33 points out of 40

Mike Bushell and Katya Jones: Quickstep to ‘Come on Eileen’ by Dexys Midnight Runners – 32 points out of 40

Michelle Visage and Giovanni Pernice: Salsa to ‘Quimbara’ by Johnny Pacheco and Celia Cruz – 31 points out of 40

Catherine Tyldesley and Johannes Radebe: Charleston to ‘Single Ladies’ by Beyoncé – 30 points out of 40

David James and Nadiya Bychkova: Quickstep to ‘From Now On’ by Hugh Jackman – 28 points out of 40

Emma Weymouth and Aljaž Škorjanec: Jive to ‘Kids in America’ by Kim Wilde – 28 points out of 40

Dev Griffin and Dianne Buswell: Cha Cha Cha to ‘Dancing With a Stranger’ by Sam Smith featuring Normani – 27 points out of 40

Chris Ramsey and Karen Hauer: Jive to ‘Saturday Night’s Alright (For Fighting)’ by Elton John – 26 points out of 40

Will Bayley and Janette Manrara: Foxtrot to ‘Señorita’ by Shawn Mendes and Camila Cabello – 24 points out of 40

Alex Scott and Neil Jones: Tango to ‘Go Your Own Way’ by Fleetwood Mac – 23 points out of 40